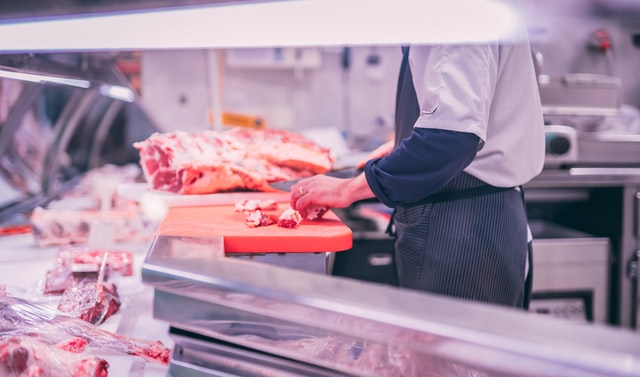 On March 23, a day when the United States registered 135 coronavirus deaths, Sanderson Farms, America’s third-largest poultry processor, announced one of their workers tested positive for the virus. It was the first reported case from a major meat processor. Three days later, Smithfield Foods joined the fray by announcing an additional case at its massive South Dakota pork plant. Within days, industry giants JBS and Tyson made similar announcements.

Perhaps it’s because there is no evidence that coronavirus transmits through food, but you would have thought that news like that would have led the national news that night. After all, it’s our collective food supply. Instead, it was mostly relegated to the industry press. The New York Times/Reuters article on the closure of three plants clocked in at 257 words. That’s because America views its retail food industry, a $6 trillion market, in boring terms. There are no big Apple-style keynotes for the year’s newest products. The entire industry just kind of happens—and we buy the finished product at a grocery store. Given the concentrated nature of the industry—most companies probably like it that way.

The uncomfortable reality is that from an operational standpoint, the last forty years created a meat production system almost uniquely positioned to spread the coronavirus and exaggerate its impact.

There’s a good chance we’re about to pay the price.

The rise of industrial meat packing

For the bulk of the century, meatpacking, like dairy and other agriculture products, was a regional affair. Independent operators sold farmers animals and feed. Farmers raised the animals and meat processors butchered them. Processors then sold the meat to Wholesalers, who distributed the finished meat to grocery stores. This ecosystem supported rural economies for a generation. It was also inefficient. Each link in the food chain meant an additional salary. Starting with chicken, and led by Tyson Foods, the meat industry vertically integrated.

Under Tyson, all these businesses have been drawn onto one property. The company controls every step of meat production, with each aspect being centrally directed from the company’s headquarters in Springdale. The company’s control spans the lifetime of the animals it raises. Before there is a chicken or an egg, there is Tyson. The company’s geneticists select which kinds of birds will be grown.

Today, a handful of massive plants process America’s meat supply. Around 20% of America’s overall meat supply comes from Tyson, who has about 100 plants. Like most production plants, these facilities are optimized by maximizing output per square foot.

According to Bloomberg Businessweek:

At many meat-processing plants, workers are “essentially elbow to elbow,” said Thomas Hesse, president of United Food and Commercial Workers Union Local 401, the largest private sector union in Western Canada that represents 32,000 members, mostly in food processing and retailing. Though employees are usually wearing protective gear, the risk of contagion is difficult to completely eliminate.

Basically, our food supply is dependent on getting thousands of people in a closed space and having them work closely together. It’s a recipe for disaster.

Last week, the Smithfield pork plant that had its first case in late March, was forced to close.

By April 15, when Smithfield finally closed under pressure from the South Dakota governor’s office, the plant had become the number one hotspot in the U.S., with a cluster of 644 confirmed cases among Smithfield employees and people who contracted it from them. In total, Smithfield-related infections account for 55% of the caseload in the state, which is far outpacing its far more populous Midwestern neighbour states in cases per capita.

We have a situation where thousands of low-paid workers, concentrated in a confined space, are choosing between paying rent and potentially getting sick. The concentrated structure of industrial meatpacking means that America’s meat supply is caught between their collective Sophie’s Choice.

Nassim Taleb burst into the American consciousness with his 2007 book The Black Swan. In it, he argued that society is primarily shaped by unpredictable events with massive impacts—which are then rationalized after the fact. The book received almost universal acclaim; the London Times argued it “altered modern thinking.” In 2009 he followed the landmark release with Antifragile, an attempt to describe a framework to thrive in a black swan world. “In spite of the chronology…” Taleb wrote in the book’s introduction, “Antifragile would be the main volume and The Black Swan its backup of sorts.”

The book lays out a framework for developing systems that thrive in the disorder caused by black swan events. Fragile systems collapse under pressure, antifragile thrive. One of the central tenants of Antifragile is that large institutions pose a threat to a system’s overall stability.

When parsing through the book it becomes clearer and clearer that, although Taleb doesn’t believe coronavirus is a black swan event, industrial meatpacking is a uniquely fragile system.

In spite of what is studied in business schools concerning “economies of scale,” size hurts you at times of stress; it is not a good idea to be large during difficult times. Some economists have been wondering why mergers of corporations do not appear to play out. The combined unit is now much larger, hence more powerful, and according to the theories of economies of scale, it should be more “efficient.” But the numbers show, at best, no gain from such increase in size—that was already rue in 1978, when Richard Roll voiced the “hubris hypothesis,” finding it irrational for companies to engage in mergers given their poor historical record…As with the idea of having elephants as pets, squeezes are much, much more expensive (relative to size) for large corporations. The gains from size are visible but the risks are hidden, and some concealed risks seem to bring frailties into the companies.

But these systems learn because they are antifragile and set up to exploit small errors; the same cannot be said of economic crashes, since the economic system is not antifragile the way it is presently built. Why? There are hundreds of thousands of plane flights every year, and a crash in one plane does not involve others, so errors remain confined and highly epistemic—whereas globalized economic systems operate as one: errors spread and compound.

Unfortunately, we don’t live in an anti-fragile system. In fact, everything from dairy to condiments is now concentrated higher than any time in American history. Today, four firms control about 60% of the chicken industry, 63% of pork, and a staggering 80% of beef production.

Remember the pork facility that Smithfield shutdown? Well, it’s huge. “The facility,” Reuters reported, “is one of the nation’s largest pork processing facilities, representing 4% to 5% of U.S. pork production, according to the company.”