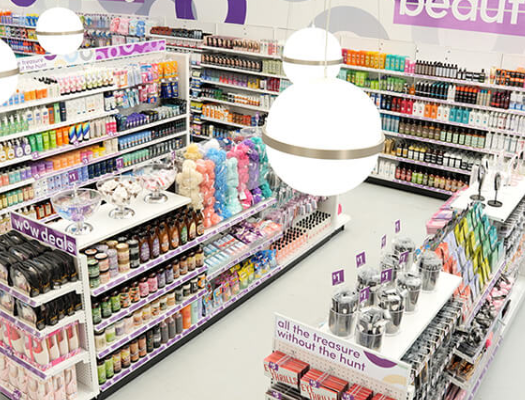 Dollar General, one of the few major bright spots in all of retail, is looking to move up the wheel of retail. Earlier this week it announced popshelf, a new adjacent store offering targeted at middle income households.

From the Wall Street Journal

The company plans to open a new brand of stores called Popshelf that mostly sells things shoppers don’t need but might want, such as party supplies, home decor or beauty products. Stores will be in the suburbs of larger cities, with two planned for the Nashville, Tenn., area in the next few weeks and 30 by the end of next year. Items will be priced low, mostly under $5, but designed to appeal to women from households that earn as much as $125,000 a year.

Let’s unpack the wheel of retail theory and the strategy behind Dollar General’s move.

The Wheel of Retail theory

The wheel of retail theory is fairly straight forward. Basically, discounters enter new markets and grab share by undercutting the competition. Razor thin margins and a bare bones operating model mean that discounters are somewhat restricted in their real estate choices. They can’t directly compete with other discounters, because it would be a race to the bottom. Since there is only so much real estate in America, discounters eventually run out of expansion territory and look for growth by offering higher quality goods.

For proof of the theory, look no farther than Walmart.

Founded in 1962 on the mantra of “Always Low Prices,” the company spread like wildfire when fair trade laws left America. Manufacturers were no longer able to control the retail pricing of their products, and Walmart took advantage. It used its size to demand steep discounts and passed the savings to consumers. This newfound pricing power was supported by cutting edge real estate strategies, operations, and logistics—leading to it becoming the most dominant retailer of a generation.

In the late 2000s, Walmart’s strategy switched. Walmart entered grocery and created “superstores.” Low prices were still important to the company’s strategy, but so was the overall shopping experience. In 2019, the company announced plans to invest $11 billion updating over 500 storefronts, which includes redesigning automotive and cosmetics. They aren’t selling the cheapest or the best—but somewhere in between. The company’s mantra is now “Save Money. Live Better.”

The article had two key arguments:

Despite today’s announcement, I still think I was mostly correct in this analysis. The flagship Dollar General stores will continue the discounter strategy. What I missed is that the company itself would launch an entirely new brand to move up the wheel of retail. Reading through their investor remarks it’s clear that Dollar General understands the challenge ahead and has built a strategy to avoid the pitfalls.

Product Mix and the Wheel of Retail

The first pitfall is the operating model generated by Dollar General’s product mix. Discounters are a pure efficiency play. They offer limited merchandising and customer service but make up for it with low prices. From a product mix perspective, what type of goods can you sell with this model?

Here are the goods Dollar General calls consumables, which constitute around 78% of the company’s total sales.

The company’s 2019 Annual Report details the reality of this product mix approach:

Historically, our sales of consumables, which tend to have lower gross margins, have been the key drivers of net sales and customer traffic, while sales of non-consumables, which tend to have higher gross margins, have contributed to more profitable sales growth and an increase in average transaction amount. Our sales mix has continued to shift slightly toward consumables, and, within consumables, slightly toward lower margin departments such as perishables. While we expect some sales mix challenges to persist, certain of our initiatives are intended to address these trends, although there can be no assurance we will be successful in reversing them.

Dollar General is boxed into the same operating model that makes it so hard to move up the wheel of retail.

Popshelf grew out of a piloted approach to innovation

Knowing the limitations of it’s operating model, Dollar General began to experiment. It launched a non-consumable initiative (NCI) that sought to standardize the merchandising of higher-margin non-consumable products at its stores. (Think home decorations and other knickknacks.) Remember, this was not a small undertaking. Unlike basic consumables, home decorations require a level of proper merchandising–which requires workers to proper stock and display items. Dollar General operates with a barebones labor model. It has 1-2 people working in each store at a time.

The initiative worked. Stores that were involved with NCI saw incremental growth of 8 percent.

Here’s where I think Dollar General management is very smart. Instead of trying to move up the wheel of retail across the entire store, they are limiting the upscaling to one category (non-consumables) and expanding the initiative to 5,400 stores by the end of this year. They may be able to pull off better merchandising with limited labor in two aisles. There’s no way they could execute in all ten or so of the store.

Popshelf may be able to move up the wheel of retail

By segmenting their offerings Dollar General will be able to take their established logistics and sourcing expertise and layer on a different labor model to offer something new and exciting. It don’t think it would be possible within the confines of an established Dollar General. It seems that the company agrees.

From the press release:

Although grounded in the extensive NCI merchandising learnings and real estate and operational excellence at Dollar General, popshelf is a differentiated store and shopping experience. Each approximately 9,000 square foot popshelf store is focused on delivering a combination of continually-refreshed merchandise, seasonal specials and limited-time items while also surpassing price and value expectations. popshelf shelves will also carry a highly-curated crossover assortment of Dollar General’s private brands, many of which have been recently rebranded.