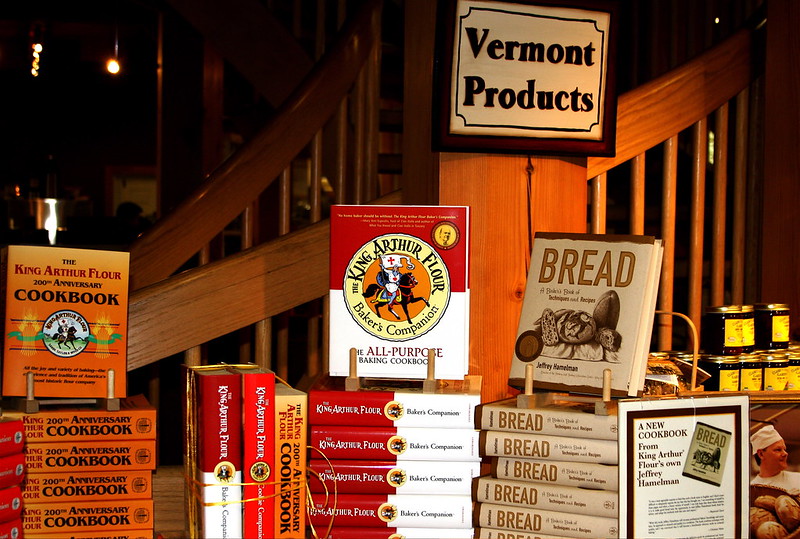 Consumer packed goods is a tough business. Almost every single consumer product category features entrenched players who have brands backed by literally hundreds of millions of dollars. Not only do companies need to create products that consumers want, but they must fend off competitors who are using their hundred-million-dollar war chests to entice customers (retailers) to give preference to their product through discounts and other sales incentives.

No where is this harder then with commodities—like flour. Realistically, for the average home baker, there isn’t much difference between flours. Today, the retail flour industry is dominated by General Mills, whose Gold Medal brand contributes to the conglomerate’s $17 billion in revenue every year. One thing about Gold Medal is that its attributes are a perfect distillation for the overall consumer goods industry: It’s a reasonable quality product that General Mills can produce quickly across the country.

As flour is exposed to oxygen it naturally bleaches—making it easier to bake. Gold Medal, and most other store-brands, are artificially bleached. A bleaching agent like chlorine gas is used to speed the whole process up. This allows millers to turn production over in a fraction of the time—increasing production efficiency and profit.

Milling flour, at the risk of stating the obvious, is not a new business. The basic technologies of milling were invented sometime in the third century B.C. For the early centuries of American history, local mills, powered by water, were economic anchors for small towns across the American colonies and, later, the nation. Their physical legacy is the hundreds of old stone gristmills scattered around the country, some converted to other uses, others quietly decaying.

The abandoned mills are testament to the fact that during the 20th century, the business of flour was almost entirely overtaken by large, centralized operations. For many decades now, flour has been ruled by the central dogma of American business strategy: maximization of size and scale, ideally to the point of monopoly. Most of America’s large national corporations are built on this model.

The end result is a commodity product across American homes. Something weird happened during the coronavirus era. People flocked to branded flour. The biggest beneficiary was King Arthur.

King Arthur is Vermont based employee-owned flour company. In 1984 it logged about $4 million in sales; in 2019 it shipped $150 million worth of flour to retailers. On average King Arthur is priced above Gold Medal.

Bloomberg recently profiled the company. Here’s what it had to say about the company’s strategy:

At the heart of the company’s approach is wheat sourcing. It pays extra for wheat that’s especially high in protein—the critical element for giving baked goods a nice, proud rise. The 45 mills that make King Arthur flour, including Farmer Direct, meticulously blend each variety to get the protein ratio consistent within two-tenths of a percent. King Arthur all-purpose flour clocks in at a sturdy 11.7%, a figure that’s printed right on the front of the bag. The resulting breads are light and airy; the cookies don’t spread too much on the tray…The flour is never bleached, lending it a creamy, natural appearance that sets it apart from its bright-white competitors.

By comparison, Gold Medal is bleached flour and has a protein ratio is 10.5%. That means King Arthur sells a premium product at a premium price.

But how does it differentiate itself? After all, very few people probably know that more protein leads to better baking.

How King Arthur turned a commodity into a branded product

Early on, King Arthur management viewed it as much more than a flour company. It wasn’t selling flour, it was selling the joy and love of baking.

As the business’s fortunes have grown, the Sands family’s commitment to baking education has continued to flourish. King Arthur has published three cookbooks, and it offers more than 1,000 recipes on its website—gateways to a thriving e-commerce operation where you can pick up whole-wheat pastry flour, Indonesian cinnamon, or a baguette pan. For 20 years the company has also run a hotline staffed by experienced bakers, who field thousands of calls each month from customers fretting about proofing temperatures or recipe substitutions. An equally knowledgeable team tackles questions and comments that come in through social media.

I think the bolded part bears repeating. For two decades the company has ran a baking hotline where people can call and ask questions about baking! Not only did it sell a premium product, but it built a support infrastructure to support a community.

From commodity to branded – a recipe.

Success in consumer products is about execution. With that in mind, I think the following framework can help in understanding what to execute.

As categories grow and scale, gaps inevitably develop across brands. With razors it became price, with Gillette and opening itself up to cheap competitors like Dollar Shave Club. With flour it was quality—allowing a premium brand like King Arthur emerge.