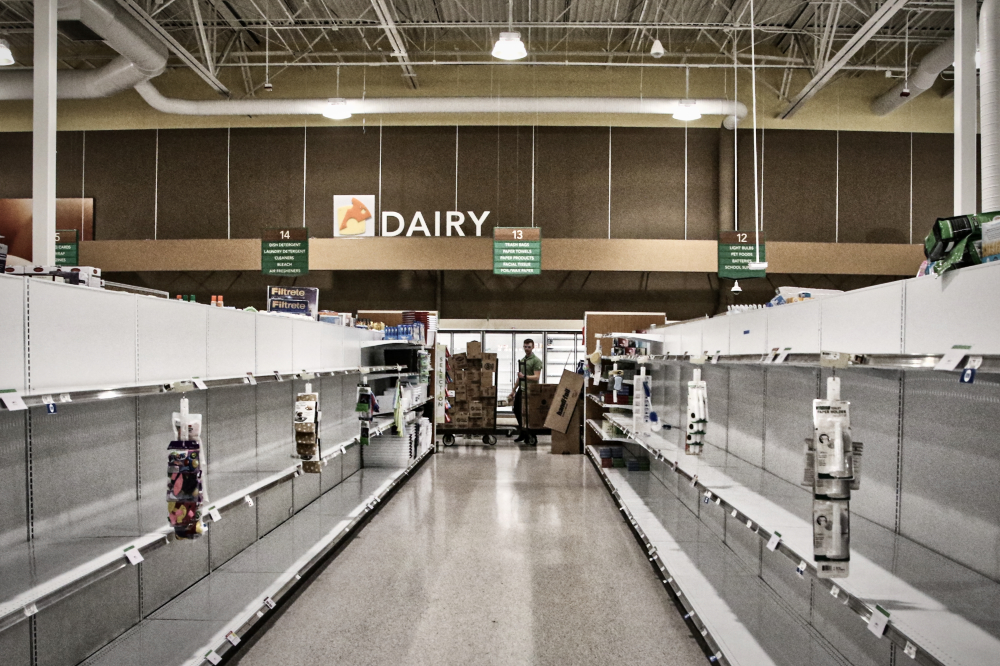 Just one week after March 15, 2020, when President Donald Trump claimed the US had ‘tremendous control’ of the coronavirus pandemic, California Governor Gavin Newsome ordered all state residents to stay home. “The order,” the New York Times reported, “represents the most drastic measure any governor has taken to control the virus.” Similar orders may become the norm, as ‘worse case” expert predictions place the COVID-19 death toll at potentially millions of people.

Given the public health scope of the coronavirus, it seems somewhat trivial, but the effective shutdown of the American economy will have massive impacts on the CPG world. On one hand, there’s probably never been more demand for a lot of the CPG world’s products (packaged foods, paper goods, and hand sanitizer in particular). On the other hand, it’s going to be harder and harder to source many of the products that Americans use every day.

The result will be a nation of 350 million people, who are used to living in relative abundance, adjusting to a life of relative scarcity. Many in the industry expect that long lines and empty shelves are going to become the short-term new normal. A recent survey by DigitalCommerce 360 revealed that 44 percent of surveyed retailers expect production delays. 40% percent expect ongoing inventory shortages throughout the year. What’s frustrating is that the coronavirus isn’t the cause of the scarcity—it’s a symptom of a more significant issue: the outsourcing of the American supply chain.

It’s a 12-hour flight from San Francisco to Taiwan. Once there, you’ll find Hsinchu, a city of about half a million people. Hsinchu is relatively obscure unless you manufacture computers. If you work in the industry, you know that in the late 1990s, the two largest semiconductor manufacturers were located in the same Hsinchu industrial park. An earthquake struck the island in September 1999. The damage forced the country to press pause on a week’s worth of production.

Barry Lynn describes what happened next in his book End of the Line:

The first Americans to feel the effect of the quake were, therefore, workers at factories that depend on components made in Taiwan; within days, thousands of manufacturing employees were sent home from assembly lines from California to Texas. The next Americans to feel the quake were investors. As Wall Street began to make sense of the disaster, traders quickly off-loaded stocks of some of the biggest electronics firms with Dell, Hewlett-Packard, and Apple among those that fell furthest. Last of all, Americans felt the quake as consumers. By Christmas, shoppers faced shortages of everything from laptop computers to Furby dolls to Barbie Cash Registers, all of which had been hit hard by parts shortages.

Barry Lynn – End of the Line

All of this over a one-week delay caused by an earthquake. Now, the entire economy, including the CPG industry, is facing a shutdown that may last months.

Coronavirus and the CPG Supply Chain

Unfortunately, in many categories, the problem has gotten worse, not better. 80 percent of active ingredients in pharmaceuticals come from outside America. Although it’s trivial in comparison, Coca-Cola is anticipating Diet Coke shortages because it sources most artificial sweeteners abroad. Earlier this week, Vox summarized the issue facing many CPG companies:

The slowdown is a reminder of how heavily many US companies rely on Chinese suppliers, whether for finished goods or component materials: Procter & Gamble, whose brands include Charmin, Pampers, and Tide, warned investors in late February that about 17,600 of its products would be impacted by the disruption in China, where it has 387 suppliers shipping more than 9,000 materials.

“Each of these suppliers faces their own challenges in resuming operations,” Jon Moeller, P&G’s CFO, told analysts. “The challenges change with the hour.”

The past two decades saw an incredible increase in the internationalization of the US manufacturing supply chain. Most large companies have supply chains that cross multiple boarders. There’s massive benefits from this–most notably cost. But there are also risks–big ones–often ignored by most until they happen. Today, we’re seeing the risks play out in real-time.

The result will be an interesting dynamic. CPG companies that resisted the allure of the creation of cheap, but complicated supply chains, may actually prosper–simply because they can source raw materials effectively. Luckily, most food processors fit into this camp. There shouldn’t be any major issues sourcing and processing food for market.

The idea that any of this is an unpredictable shock is simply nonsense. It’s merely an information lag. The circumstantial evidence dates back to Taiwan and the late 1990s–anyone who argues otherwise is incompetent or ignorant.

In 2014, I wrote the following about climate change:

Their (Li and Fung) international network of sourcing and logistics relies on three things: cheap energy, cheap materials and political stability. Climate change has the potential to upend all three.

I was slightly off. So does a global pandemic.

Photo by Mick Haupt on Unsplash