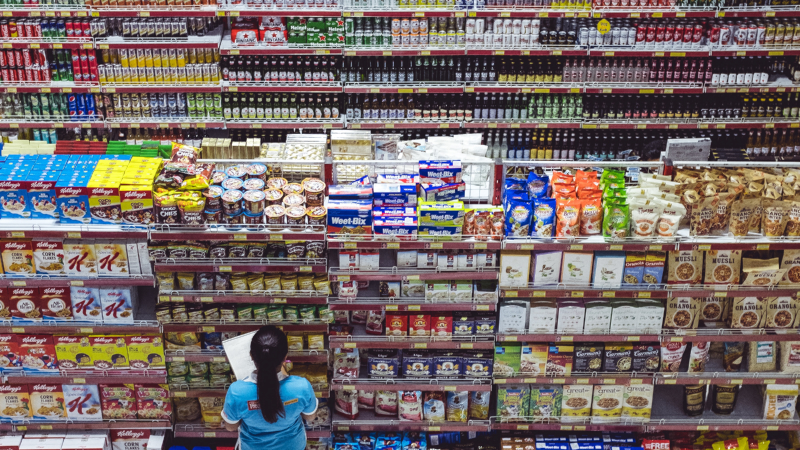 Consumer packaged goods (CPG) companies are everywhere. However, most consumers know the brands not the companies. Sprite, Tide, and Moleskine notebooks are all packaged goods brands purchased and used by millions every day. Coca-Cola, P&G, and Moleskine are the CPG companies that produce them. From an operational perspective, a CPG company manufactures products, sells them to retailers, who then sell them to consumers.

The table below gives a few more examples:

CPG Brands have been around for hundreds of years, although in modern times, CPG categories are mostly considered to be fast moving goods like food, drinks, and cleaning products. Put it this way, if you buy it regularly, it’s probably a CPG. Today, CPG brands are marketed around a variety of traits. Some like Clif Bar and Gatorade are performance-based. Others, like Dove soap, are centered around equality and self-love. Originally, CPG brands were built around one thing: safety.

Why is this? In the early 1900s, most goods were effectively brandless, sold out of general stores from bulk supplies. This led to manufacturers and retailers taking advantage of an unwitting public.

In his book on the rise of the Atlantic and Pacific tea company, Marc Levinson, explains:

Lemon extract often contained no lemon. Bottled soft drinks used coal tar, a carcinogen, as a colorant. Some ketchups used saccharine, even then suspected as a hazardous adulterant, as a preservative. The “tin” in tin cans contained as much as 12 percent lead, which leached into the fruits and vegetables. Zinc chloride, used to prepare the tops for soldering, often ran into the cans during the soldering process, poisoning the food inside.

As a result, CPG companies began to brand themselves in terms of quality and safety. If a consumer saw Dove soap on the shelf, they knew it was a quality bar that floated, and they’d purchase it with confidence. Manufacturers were now incentivized to differentiate their products. If you’re looking to learn about the business processes and operations that enabled this differentiation, check out this article, which details the rise of Kraft-Heinz. The rest of this post focuses on the high level business strategy of a CPG company. The goal of each is to try and sell as many products as they can, to as many customers as they can reach.

Today, most CPG companies adopt a business model that pushes towards horizontal or vertical integration to accomplish the goal.

Up until about twenty years ago, the definition of a CPG company was straight forward. P&G was a CPG company that manufactured a variety of household products that customers purchased at retail stores.

Research and development: Creating a product that consumers want.

Production: Figuring out how to manufacture the improved product at scale.

Supply Chain: Ensuring that you have enough raw commodities to manufacture the product.

Transportation: Getting the product to the customer (retailer).

Sales: Ensuring the product gets prime placement for a customer through negotiations and pricing.

These processes are incredibly scalable and repeatable across multiple categories of goods. Once a company builds up a production system or a sales department, it can sometimes seamlessly plug new items and offerings into the established business process.

Horizontal integration is simply when a company in one category, expands into another category. In the case of P&G, it started in bath soap, moved to laundry soap, then paper products, coffee, potato chips, and even dog food. Each category may seem different, but the core business processes are the same. The general process of producing, selling, and distributing aspirin and cough medicine to retailers is identical. The more products that a CPG company can sell into a retailer, the more leverage it generates. Fifty years ago, a lot of vertical integration was done organically, through research and development. Today, it’s primarily done through acquisitions. The logic is simple. Lax anti-trust enforcement means that retailers are becoming more and more powerful, which means that a CPG company needs more brands to bargain with.

Just because the goal of a CPG company is “to sell as as many products as they can, to as many customers as they can reach,” it doesn’t, however, mean that a CPG company will sell its products to all retailers. The retailers it chooses to sell to should fit within the brand’s perceived segment.

Initially, a branded CPG company like P&G was hesitant to sell products through discount stores—as it believed the stores tarnished their middle-class identity. But money talks. Many opted to sell smaller pack sizes and value options when dollar stores became a consistent revenue driver for manufacturers.

On the other hand, Nike is a premium brand. It’s mostly an apparel company, but they certainty produce some CPG-like products. You will probably never see Nike products at Dollar General. Instead, it opted to target high-end retailers and athletic stores, but even that is changing.

After a few years, NIKE announced it would no longer sell through Amazon, instead, looking to build up its own direct-to-consumer capabilities.

A CPG Company and Vertical Integration

Nike’s decision to abandon Amazon had many drivers. The first is probably Amazon’s refusal to combat counterfeiting. The second is perhaps Nike’s desire to integrate vertically. Vertical integration is when a company internalizes every business process—from 1-6. Instead of buying another brand to create more leverage against retailers, it buys a commodity supplier or builds its own storefront to create efficiencies within production and distribution.

A vertically integrated CPG company would sell products to retailers and directly to customers via company owned stores or feature a robust direct-to-consumer/catalog model. In the case of Nike, it now has over 1,150 retail locations—each with an average revenue of $34 million.

This strategy obviously can’t be executed by all CPG companies—especially fast-moving consumer goods (FMCG). It would be completely unrealistic for Coca-Cola or Campbell Soup Company to open stores that only sold their products. It’s also entirely impractical for a FMCG to develop a profitable direct-to-consumer business. Customer acquisition costs are too high for the products given that Facebook and Google own an effective duopoly on online advertisement. Most CPG vertical integration comes from retail stores themselves–who do so through private label.

So far we’ve focused primarily on branded CPG. That is, the name brand products that every knows and loves. But brands do not operate in a vacuum. Coke is not just competing against Pepsi, but against Walmart’s Sam’s Cola. For as long as chain retailers have existed they’ve sold some level of unbranded or private label products.

For the bulk of the 20th-century private label, brands were considered inferior to branded products. That changed, however, when many products became standardized through better production and supply chain practices. Today, private labels aren’t just low-priced offerings, but brand builders for the retail chains themselves.

According to the book, Private Label Strategy:

The three best-selling private label categories in food and nonfood may still be predictable—milk, eggs, and bread in food; food-storage and trash bags, cups and plates, and toilet tissue in nonfood. However, today’s large and sophisticated retailers are able to develop credible private label offerings for categories where traditionally customers were more wary of straying from their favorite manufacturer brand names. Nowadays, store brands are present in over 95 percent of consumer packaged goods categories. Among the fastest-growing categories for private label sales are lipstick, facial moisturizers, and baby food.

Once you see a Retailer’s operating model, you’ll understand why there is such a push from retailers.

The image below is a typical retail operating model.

The shelf price is the price consumers pay a retailer. The margin is the difference between what the retailer paid the CPG company, minus the retailer’s labor and fixed costs. As you can see, there isn’t much in the retailer’s margin. This graph doesn’t include all retailer considerations (consumer preferences, product demand via mass advertising, differences in revenue per square foot of shelf-space, etc.). Still, you can certainly see why retailers want to get to vertically integrate through private label.

If a retailer owns the production of private label good, they mostly capture all the margin between the production cost and the shelf price. The high fixed cost associated with production gave manufacturers power in a negotiation, but as retailers have become larger and larger, the cost became a non-issue.

The end result of this is that established CPG brands aren’t just facing competition from other manufacturers, but they’re facing intense competition from retailers–who used to be their partners.

In Conclusion, What is a CPG Company?

It’s tough to give a complete and exhaustive definition of a CPG company. That’s because they are so varied in what they produce and how they sell. But definitions help, and hopefully, this helps better understand what a consumer packaged goods company is and the business model it uses to makes money.

At a high level, a CPG company is a firm that manufacturers products that consumers regularly buy. It then sells those products to retailers, who sell them to the end consumer. The goal is to sell as many products, to as many consumers as possible. Today, CPG companies succeed by generating leverage over retailers by offering a variety of goods through horizontal integration. Conversely, retailers are vertically integrating, and offering their own private label goods to compete with CPG companies.

Photo by Bernard Hermant on Unsplash

3 Comments → What is a CPG company? It’s more than just a brand.