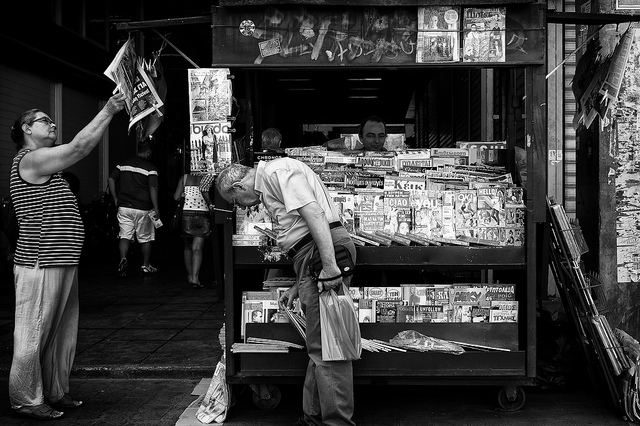 Why spend the time identifying the 27 best articles I read all year? The better question should probably be, “Why not?” I selected each article based on the following criteria:

Without further ado, here they are.

26. The Many Lives of Peter Matthiessen – Mark Adams
A look at the meaning of life through one of America’s most important writers.

25. Anthony Bourdain Has Become The Future Of Cable News, And He Couldn’t Care Less – Rob Brunner
This profile shows how Bourdain is remaking the news landscape, by doing what traditional journalists wouldn’t consider.

24. The Certainty of Donald Rumsfeld – Erol Morris
The written companion to one of the best documentaries of the year.

23. Here’s everything you need to know about “too extreme for Al Qaeda” I.S.I.S. – Gary Brecher
The title says it all. If you are interested in modern conflict very few provide better insight and analysis than Brecher.

22. The Secret Goldman Sachs Tapes – Michael Lewis
In 2012, a Senior Regulator at the New York Federal Reserve decided that the agency had a much to cozy relationship with the very clients it was supposed to watch over. She ended up secretly taping months of internal meetings. The result is the depressing proof of a regulator co-opted by the very industry it was meant to regulate.

21. Hunting Task Wabbits – Caleb Garling
The “sharing economy” is a new buzzword that shitty journalists like to write about. Caleb Garning writes about what the dangers no one seems to be thinking about. Mainly, how a “pivot” (that’s start up speak for new business model) turned a tool for empowerment into another low-wage, no benefits network.

20. The IPO is dying. Marc Andreessen explains why. – Timothy B. Lee
A forward thinking conversation on the future of business with one of the most important investors in America.

19. How to Self Publish a Bestseller ­– James Altucher
A straightforward look at how to successfully self publish a book in today’s media culture. [1. I’m not positive this was published in 2014, but I read it early 2014 and can’t seem to find a date for it.]

17. How Chip Kelly Revolutionized the NFL with the OODA Loop – Eric Gardner
Chip Kelly is the most wanted football coach in America. The reason for his rise has little to do with football and everything to do with communication.

16, Louisiana Moonshot – Bob Marshall, The Lens, Al Shaw and Brian Jacobs
To quote Propublica’s website, “The state hopes to save its rapidly disappearing coastline with a 50-year, $50 billion plan based on science that’s never been tested and money it doesn’t have. What could go wrong?”

15. Under the Volcano – Anthony Bourdain
One of the best tributes to Mexico I’ve ever read. [2. I believe this may have been adapted from No Reservations.]

14. The Most Wanted Man in the World – James Bamford
Arguably the best point by point analysis of the Edward Snowden situation.

13. The Disruption Machine – Jill Lepore
The Innovator’s Dilemma is one of the most influential business books of the last twenty years. It argued that established companies fail to innovate because proper management weighs the customer’s current needs heavier than future needs. The book inspired numerous copycats and spinoffs; you could even argue entire industries. Lepore makes a decent case that the entire theory of disruptive innovation is based off of dubious sources and logical fallacies.

12. The Strange & Curious Tale of the Last True Hermit – Michael Finkel
A bizarre story of a guy who lived in the isolated woods of Maine for over thirty years with zero human contact.

11. Gertrude of Arabia, the Woman Who Invented Iraq – Clive Irving
The true story of a British Spy who rigged an election and drew the map of the Middle East.

10. The Front Lines of Fergusson – Rembert Brown
The best thing I read on the Fergusson protest.

9. How Jurgen Klinsmann Plans to Make US Soccer Better (and Less American) – Sam Borden
A primer to the 2014 World Cup and how to guide for reforming an aging organization.

8. The 9 Billion Dollar Witness – Matt Taibbi
JP Morgan Chase paid over 9 billion dollars to keep Alayne Fleischmann from testifying. The best financial reporter today shows the reason: she has concrete proof that the bank knowingly defrauded investors out of billions.

7. The Quiet German – George Packer
The story of how an unassuming East German physicist became the most powerful person in Europe. I’m dying to read more about Angela Merkel. If anyone has any suggestions I’d appreciate them.

6. The Woman Who Captured Snowden – Alex Pasternack
An in-depth profile into Laura Poitras, the woman Edward Snowden trusted to tell his story.

5. Soak the Rich – David Graeber and Thomas Piketty
Thomas Piketty’s Capital in the Twenty First Century was the most important book published this year. This conversation published in The Baffler does a good job of explaining the key points.

4. Sex is Sex. Money is Money – Svetlana V.
Prostitution is the world’s oldest profession, and most of the industry is still run like it is 1540. One 19-year-old Russian immigrant applied modern business techniques and found herself at an elite price point. The story is probably a bit NSFW, but reads as a TV-MA business book.

3. In Conversation: Chris Rock – Frank Rich
I love stand up comedy. To me, a great stand-up comedian is nothing less than a modern day philosopher. One of the greatest sits down for a long form interview that covers a variety of topics. His thoughts on Lost in Translation explained what it’s like to be a rich minority in America better than anything I’ve ever read.

2. Before the Law – Jennifer Gonnerman
On May 15, 2010 a boy was accused of theft. The lone witness was later proven to be a liar. The boy spent the next three years in prison without being convicted of a crime. An unbelievably well written and researched investigation into the American justice system.

1. Losing Sparta – Esther Kaplan
Sparta, Tennessee was home to a flexible union and one of the most efficient factories in the world. This was until the Phillips corporation decided to outsource production of lightbulbs to Mexico. Popular wisdom held that this decision would be great for Philips’ profits but bad for labor. A deep dive into the issue reveals that it was terrible for both. This was hands down the best article I read the entire year.

Did I miss something?