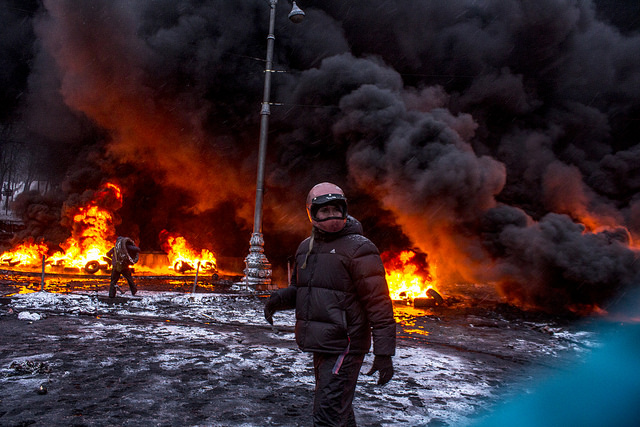 The world has been on high alert since Russian President Vladimir Putin threw caution to the wind and sent military troops to occupy Ukraine’s Crimean Peninsula. This act of aggression coincided with the defection of Ukrainian naval leadership and the seizing of parliamentary buildings by forces loyal to Russia. Many columnist and analysts are predicting a massive global conflict and a potential return to the Cold War era. What we aren’t seeing is a coherent narrative about how the conflict got to this stage. I’ve gone ahead and curated 5 great sources that paint an accurate narrative of the historical, political and strategic framework of the 2014 Ukrainian revolution.

The situation is confusing partly because sections of Ukraine are ethnically Russian, Russia has a large naval base in Ukraine, and not everyone can agree with where loyalties lie. The New York Times produced six maps that visualize the conflict including, ethnic breakdowns, gas routes and military bases.

2. Why did the citizens of Ukraine protest?

Many commentators simplified the Ukraine situation into a cut and dry battle between good and evil. Ms. Piper’s report does a fantastic job of setting the political and historical framework of the situation. She outlines the dilemma faced by Ukraine (mounting debt) and the pressures that convinced Yanukovich to ultimately spurn the West and ignite a revolt.

“…Businessmen warned that a deal with the EU would provoke Russia – Ukraine’s former master in Soviet times – into toughening an economic blockade on Ukrainian goods. Yanukovich stood firm.

“We will pursue integration with Europe,” he barked back, according to three people who attended the meeting. He seemed dead set on looking west.

Less than three months later Yanukovich spurned the EU, embraced Russian President Vladimir Putin and struck a deal on December 17 for a bailout of his country. Russia will invest $15 billion in Ukraine’s government debt and reduce by about a third the price that Naftogaz, Ukraine’s national energy company, pays for Russian gas.

It is not clear what Yanukovich agreed to give Russia in return, but two sources close to him said he may have had to surrender some control over Ukraine’s gas pipeline network…”

3. Why did the protest turn into a revolt?

Mr. Synder’s analysis explains why Ukraine went from a minor protest to a widespread revolt. He explains how Yanukovich’s regime’s attempt to circumvent democracy ignited the revolt and the complex relationship anti-Semitism plays in the conflict.

“…On January 16, the Ukrainian government, headed by President Yanukovych, tried to put an end to Ukrainian civil society. A series of laws passed hastily and without following normal procedure did away with freedom of speech and assembly, and removed the few remaining checks on executive authority. This was intended to turn Ukraine into a dictatorship and to make all participants in the Maidan, by then probably numbering in the low millions, into criminals. The result was that the protests, until then entirely peaceful, became violent. Yanukovych lost support, even in his political base in the southeast, near the Russian border…”

4. What is the situation on the ground?

We’ve all seen the devastating before and after pictures of Ukraine, but what actually happened on the ground? Vice takes you to the scene of the protest before, during and after they turned violent. I’d also suggest following Vice’s reporter in Crimea Simon Ostrovsky.

5. Why is Ukraine such a big deal?

Is Europe’s gas supply threatened by the Ukraine crisis?

One of the reasons Ukraine is such a complex and important problem is natural gas. Russia has a lot of it, and Ukrainian pipelines brings it to Russia’s largest market: Europe. Russia supplies about 30% of Europe’s gas, and Mr. Henley does a reasonable job explaining the history of the gas conflicts and how this time is different.

“…In late 2005, Gazprom said it planned to hike the price it charged Ukraine for natural gas from $50 per 1,000 cubic metres, to $230. The company, so important to Russia that it used to be a ministry and was once headed by the former president (and current prime minister) Dmitry Medvedev, said it simply wanted a fair market price; the move had nothing to do with Ukraine’s increasingly strong ties with the European Union and Nato. Kiev, unsurprisingly, said it would not pay, and on 1 January 2006 – the two countries having spectacularly failed to reach an agreement – Gazprom turned off the taps.

The impact was immediate – and not just in Ukraine. The country is crossed by a network of Soviet-era pipelines that carry Russian natural gas to many European Union member states and beyond; more than a quarter of the EU’s total gas needs were met by Russian gas, and some 80% of it came via Ukrainian pipelines. Austria, France, Germany, Hungary, Italy and Poland soon reported gas pressure in their own pipelines was down by as much as 30%…”