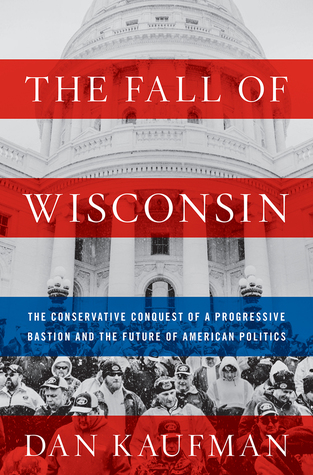 The Fall of Wisconsin, a 2018 book by New Yorker’s Dan Kaufman, analyzes how conservatives utilized Dark Money, Gerrymandering, and Weak Democratic opposition to enact a radical and dangerous conservative agenda in Wisconsin. “(Their) devastating success has allowed for the transformation of Wisconsin into a laboratory for corporate interests and conservative activists,” Kaufman writes. Act 10 (rightly) receives the majority of the press, but it’s really one of many extreme changes the Republican Party brought to Wisconsin. In the last two years, the Republican-controlled Senate supported a bill to remove all of the state’s air-pollution regulations. This book review will outline Kaufman’s core thesis and help explain how three forces, Dark Money, Gerrymandering, and weak Democratic Opposition created a nightmare scenario.

The Citizen’s United decision effectively allowed corporations to launder political spending through non-profits. According to Issue One, a non-partisan campaign finance reform organization, just 15 groups have spent more than $600 million “in secret money” influencing our elections. In Wisconsin, no organization has been more potent than the Bradley Foundation. Initially established by a Milwaukee industrialist looking to avoid inheritance taxes, it initially focuses on area hospitals and universities. In the 1980s it transitioned into a weaponized conservative outlet—focusing on school vouchers, destroying unions, and promoting white supremacy masked in academic jargon. The foundation’s assets have ballooned to nearly $850 million.

The Bradley Foundation’s most significant success has been Act 10—legislation that stripped collective bargaining rights from the state’s public workers (except police and firefighters—two groups who were neutral or supported Walker’s initial election). The legislation kick-started massive teacher protests, which Walker later compared to ISIS. The effects have been devastating for the state’s educational system. According to an analysis by the Milwaukee Journal Sentinel, Act 10 resulted in a 30% drop in state granted education degrees resulting in 25 percent of school districts reporting an “extreme shortage” of qualified applicants. “Teaching,” current Governor-elect Tony Evers remarked at the time, “no longer considered an attractive career path.”

Perhaps the most insidious effect was villainizing teachers. The last thirty years left many Wisconsinites behind. Instead of asking “Why they no longer had health insurance,” people started asking “Why did teachers have it?” “A Wisconsin labor leader once told me that Act 10 succeeded,” said Kauffman. The leader’s answer is both telling and depressing. “Because Walker transformed the person who spent the day in a classroom teaching his child from “teacher” to “union member.”

Once in control over Wisconsin’s government, the Republican party launched a full-throated assault on voting rights in the state. They passed restrictive voter identification laws to suppress minority and student votes and cemented control by gerrymandering election boundaries. In the first election after the rigged voting maps, Republican received 175,000 fewer votes but ended the day with a 60-39 majority. This was a fundamental part of the Republican strategy. Restrict the rights of non-Republican voters, while reducing the impact of non-Republican votes. In 2018, after Governor Walker was surprisingly beaten by State Superintendent Tony Evers, Republicans began their second assault on Democracy and voting rights.

A portion of Republican success in the state is due to the Democratic party. Modern democrats had no interest in defending the average working person against the Republican onslaught. President Obama declined to even campaign in Wisconsin during the passage of the bill—creating a boom for Scott Walker. The book doesn’t dive into this, but in the mid-1990s, centrist Democrats began to move away from unions as a source of natural support. The transition started with Jimmy Carter but solidified itself after NAFTA. The logic was that for every union vote they lost, they’d make it up with the professional suburbs. Led by Bill Clinton, liberals began to abandon New Deal policies and adopt market “friendly” positions. The result was market deregulation and globalization—at the same time, Democrats reduced the welfare state. The result was two parties working against working people. This directly led to Donald Trump.

Should you read The Fall of Wisconsin?

The point of every review is basically, should I read this book? After I finished The Fall of Wisconsin, I would have said no. I didn’t really learn anything during it. However, I also live in Wisconsin and am active in Wisconsin politics. As I began writing my review, I realized that Kauffman did a solid job of distilling the state’s political revolution. If you don’t live here, you should absolutely read this book. The current state of Wisconsin is the nation’s fate if Progressives don’t start winning office and exterting political power.