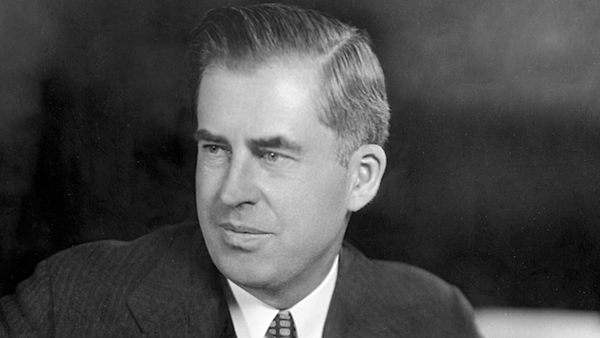 In July 1944, a little over a year before the end of WW2, President Franklin Delano Roosevelt looked tired and sick. Publicly, he was taking month-long rests under the guise of war planning. Privately, he was diagnosed with severe hypertension, heart disease, cardiac failure and acute bronchitis.

The stress of leading a nation at war, rehabilitating a depressed economy and a two pack a day cigarette habit had turned his heart into a time bomb. It wasn’t a question of “if”, but “when” FDR would succumb to a major stroke. Most insiders knew in the upcoming election, a Democratic vote for President was really a vote for the Vice President. It was under these conditions that FDR made a decision that transformed the next fifty years of American history. He removed Vice President Henry Wallace from the Presidential ticket.

Prior to the rise of Bernie Sanders, Henry Wallace was the last true Progressive leader to wield national power. A scientist farmer, and capable administrator, Wallace revolutionized American farming as the Secretary of Agriculture. He spearheaded the New Deal’s most revolutionary and innovative programs, fought concentrations of power, and transformed the Federal Government into a leading incubator of scientific research. He spoke openly about the need to end racial segregation, the benefits of international cooperation, and the importance of economic development. When Norman Borlaug won the Nobel Peace Prize for developing disease-resistant wheat–it’s estimated that the hybrid grain saved over 1 billion lives—he credited Wallace as his inspiration. He was also popular. At the time of FDR’s decision, a Gallop poll showed Wallace was overwhelming backed by Democratic voters. “Nationwide,” wrote biographers, John Culver and John Hyde, “Wallace’s support equaled the next three (Vice-Presidential) candidates’ combined.” The man who ultimately replaced him, Harry Truman, a generic Democratic Party loyalist, earned 2 percent.

The question is, why? Why did FDR drop Henry Wallace from the 1944 Presidential ticket? Why did FDR want Henry Wallace, the consummate New Dealer, with vast popularity, and support among key voting-blocs removed? It’s one of the greatest “what-ifs” in American history. Critics argue that Wallace’s sympathetic view towards the Soviet Union would have weakened American interests. Supporters argue he would have ended the Cold War before it started. I don’t think there will ever be a clear answer to this question, but I wanted to illuminate 8 key drivers.

Henry Wallace described himself as a “progressive capitalist”, his critics preferred anti-business communist. At first this seems like the standard right-wing response to a leftist leader. Closer examination reveals it was a delusional accusation. Wallace was a self-made businessman who founded the Hi-Bred Corn Company, a literal billion-dollar company. He was however, an ardent anti-monopolist. He believed that unregulated markets would lead to intense economic and political concentration that would inevitability destroy the average man. In his view, it was the government’s responsibility to level the playing field. As Secretary of Agriculture, he stabilized America’s food system by pursuing policies that prioritized small farmers over conglomerate grain processors. As Vice President, he argued that the United Nations must have the power to regulate international commerce, because technology would transfer power from small businesses to international corporations. “Let us not be deceived into thinking that attacks on cartels are attacks on American business,” he said. “On the contrary, cartels are the greatest menace to American business principles of free private enterprise and equal opportunity.” This was a direct confrontation with moderates who relied on entrenched and moneyed interests across both sides of the political spectrum. Dumping Wallace would remove this distraction.

Wallace was always viewed as a good-natured dreamer without the temperament for politics. He steadfastly refused to grease palms and shake hands with the donors who fueled the Democratic regime. Nowhere was this more on display than the 1944 Democratic convention–where he lost the Vice Presidency. Wallace gave a speech that turned the crowd into a near riot. Everyone knew that the party bosses wanted him replaced with a more moderate politician. He responded with a full-throated defense of progressive ideals. “It was blunt, grave, tactless,” wrote Time Magazine. “It easily explained why Henry Wallace was the best-loved and best-hated man in the stadium.” The delegates stormed the stage and demanded an early vote. Claude Pepper, an FDR loyalist from Florida, knew that meant trouble. “I was convinced,” he later recalled, “that if a vote could be taken that evening Wallace could have been nominated.” Pepper employed a procedural move to end the night’s discussion.

Wallace refused to campaign on the momentum. He sat in his hotel room while the Democratic Party spent the off-hours trading appointments for votes. The next day Truman was the Democratic nominee for Vice President.

Many of Roosevelt’s advisors believed that the President faced a close battle for the South, and Wallace’s commitment to social justice was a distinct liability. FDR’s personal racial views were moderate at the time, but incredibly racist in hindsight. Henry Wallace’s views would still be considered progressive today, and he had them nearly half a decade before Jackie Robinson shattered baseball’s color barrier. Wallace openly advocated for the abolition of the poll tax and the end of segregation. “The future,” he said, “belongs to those who go down the line unswervingly for the liberal principles of both political democracy and economic democracy regardless of race, color or religion…Equal education opportunities must come. The future must bring equal wages for equal work regardless of sex or race.” As an independent candidate in the 1948 Presidential election, Wallace refused to speak to segregated audiences or shop at segregated stores.

Henry Wallace was raised Christian, but he had a genuine curiosity for all things spiritual. He didn’t necessarily believe in a traditional Judeo-Christian God, instead, he had an underlying belief that God was a universal presence that could be felt in everything. This approach led to several seemingly “alternative” interests.

The last point almost became a career ender, but FDR essentially blackmailed Republican newspapers into not publishing Wallace’s correspondence. The idea he was an aloof-mystics dogged him throughout his public career. Later in life, Wallace slyly agreed with a reporter that “nature, science and religion are as one.” Except he asked to add economics to the list.

From the New Yorker:

“After a robust start in the Vice-Presidency, Wallace fell into a territorial battle with Jesse Jones, the Secretary of Commerce, who had dragged his feet in importing materials for wartime production. A more skilled operator could have worked out a compromise, but in 1943 Wallace went public with inflammatory charges that Jones’s “obstructionist tactics . . . have been of major consequence in this job of waging total war.” He all but called Jones a traitor. Roosevelt hated the spectacle of such infighting in wartime, and probably lost faith in Wallace at that moment.”

Towards the end of WW2, Britain looked to negotiate a peace that preserved a semblance of their colonial power, while establishing themselves and America as clear Western leaders. Henry Wallace was basically against that entire sentiment. He despised colonialism and wanted an inclusive international coalition. As Vice President, he argued that in addition to economic development aid for Asia, each current colonial area was entitled to self-determination. Britain’s Chief Intelligence Officer’s response was simple and direct. Wallace had to go. “I came to regard Wallace as a menace, he said. “I took action to ensure that the White House was aware that the British government would view with concern Wallace’s appearance on the ticket at the 1944 presidential election.”

Any progressive, even if they have controlling interests in a billion-dollar company, will be accused of communist sympathies. Combined with his hatred of centralized business power and open desire for Soviet/American cooperation, Wallace was an easy target for the Red Scare. Even his best-intentioned policies were often construed as being pro-communist. In his later years (post-VP) Wallace advocated for sharing scientific nuclear secrets with the Soviet Union. To this day, the Right view this as proof of treason. Detailed reporting done by Culver and Hyde revealed the fallacy of that idea. Yes, Wallace wanted to share scientific knowledge with most countries. He also wanted to keep the functional knowledge a secret. He thought (and many agreed) that the gesture would help defuse the nuclear arms race.

FDR could have been senile

To be clear, this is 100 percent pure speculation.

After FDR removed Wallace from the ticket, he didn’t banish him to professional Siberia. Instead, he told him to choose any Cabinet position except State. Wallace settled on Commerce, which oversaw the divesting of the government’s massive war holdings. It was basically the keys to the American economy. It doesn’t make much sense to remove a guy from the Vice Presidency and place him in administrative control of the American economy (Note—party hardliners later stripped the divesting control from Wallace as FDR’s health crumbled). A conversation Wallace relayed may shed some light on it.

In late 1944, Wallace met with FDR to discuss trade agreements and full employment legislation. FDR responded with details about how an astrologist predicted WW2 would end in 1947 (they were 2 years off). Confused, Wallace changed the subject to new incentive taxes for the post-war economy. FDR then explained his theory that tropical workers were healthier when they worked naked.

Something doesn’t really add up.

18 Comments → Why did FDR drop Henry Wallace from the 1944 Presidential Ticket?