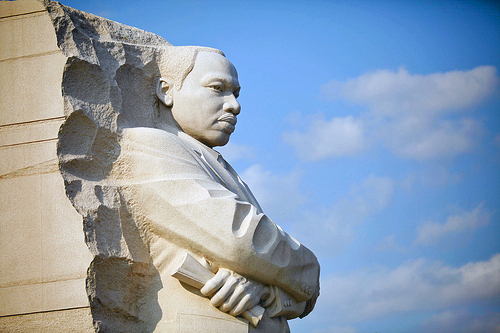 Today marks the 46th anniversary of the assassination of Rev. Martin Luther King Jr. If Thurgood Marshall was the tactical leader of the civil rights movement, King was its spiritual. It is hard to imagine anyone accomplishing more in his or her life than King, who lead non-violent protest across America and won the Nobel Prize abroad. Legacy wise, nearly every constituency has attached themselves to King, even conservatives. This is ironic since most conservatives would disown King if they knew about his opposition to Vietnam and his dream to unite the labor and civil rights movements. I’m sure today there will be hundreds of superficial articles published King, but very few will address the context of his life. I’ve gone ahead and curated five articles that do just that.

The following is from the second mention of Martin Luther King Jr. in America’s paper of record. Published days after being released from jail on bond for coordinating the Montgomery bus boycott, King’s ability to see the moral high ground and larger picture shine through. King faced 386 days in jail for refusing to pay $1,000 for the “hindering of a lawful business with out ‘just cause or legal excuse’” but knew his appeal would make its way to the Supreme Court. “This conviction and all the convictions…” King said, “will not diminish my determination one iota.”

Letter from Birmingham Jail is one of the most famous works of the 20th century, and it didn’t happen by accident. In 1962 King was arrested in Albany, Georgia and the New York Times approached him to write a biblical style “letter from prison.” Concerns over his legal situation derailed the idea. Just a year later the climate changed.

In 1963 despite constituting 40% of the population Birmingham, Alabama had zero black police officers, firefighters or store clerks. The Southern Christian Leadership Conference and Alabama Christian Movement for Human Rights planned a major non-violent protest to draw attention. The local government responded by making protesting illegal, and King and the participants found themselves arrested. As he sat in a jail cell with no bed, an aide slipped King a newspaper that featured an article by eight local ministers arguing against non-violent protest. Seemingly impervious to how it would look fifty years later the ministers argued that trusting the courts and  establishment were the way to attain civil rights.  King was incensed. He remembered the Times’ offer and eviscerated the white leaders in an eloquent case for civil disobedience. Since The New York Times was a byzantine collection of bureaucracy they never published the work. Instead the honor went to The Atlantic.

3. King was realistic about his goals

This far-reaching interview  touched on MLK’s relationship with his daughters, reflections on past mistakes, Malcom X, the future of American race relations, and the accusations that he was a communist. When asked about his hopes for the Civil Rights movement he responded:

I confess that I do not believe this day is around the corner. The concept of supremacy is so imbedded in the white society that it will take many years for color to cease to be a judgmental factor. But it is certainly my hope and dream. Indeed, it is the keystone of my faith in the future that we will someday achieve a thoroughly integrated society. I believe that before the turn of the century, if trends continue to move and develop as presently, we will have moved a long, long way toward such a society.

4. King wanted to combine the civil rights and labor movements

I am a Man

It’s hard to believe now, but at the time of his assassination Martin Luther King Jr. was becoming a fringe figure in American life. His opposition to Vietnam made him persona non-gratis at LBJ’s Whitehouse, his support of workers rights made him a communist in the eyes of Wall Street, and his non-violent approach made few friends in the black power effort. King went to Memphis on April 4, 1968 attempting to bridge the gap between America’s working poor. It was his belief that the strife of Memphis’ largely black sanitization worker could unite America’s civil rights and labor movements. Leonard Pitts’ wonderful article from Miami Herald captures both the context and legacy of the protest. In the end King succeeded, but he lost his life. The city recognized the sanitation union and granted the workers a 10 cents an hour raise.

5. King’s Assassination was part of the craziest time in American History

King’s death needs to be put in context. With Vietnam and civil rights dominating the conversation the following happened to kick of 1968:

Things looked like they may get better, but by the end of the year an even darker cloud covered America. Nixon sabotaged the peace talks, MLK Jr was dead, and so was RFK. The New Yorker’s editorial board did a nice job putting the social upheavel in context and eulogizing an admired man.
Image via Flickr