Today marks the 21st anniversary of the death of Thurgood Marshall.  He was a complicated man and perhaps the person most responsible for ending segregation in America; first as Chief Counsel of the NAACP’s Legal Defense Fund and then as a Supreme Court Justice. Marshall had immeasurable courage, once saving an innocent plaintiff from certain execution by interrupting a poker game between the President of the United States and the Chief Justice of the Supreme Court. When asked by Marshall to sign a stay of execution Chief Justice Fred Vinson remarked, “I’ll tell you one thing, if you’ve got guts enough to break in on this, I’ve got guts enough to sign it.”

For those interested in learning more about Marshall I’d recommend Gilbert King’s Devil in the Grove a Pulitzer Prize winning investigation into the 1949 Groveland Four Trial. The book offers a history of the civil rights movement, a biography of Thurgood Marshall, and a parallel to Obama’s second term strategy. [1. All unattributed quotes in this post are from King’s book]

Overturning 100 plus years of institutional racism needed not only courage, but a legal and strategic genius. Marshall was both. If he found out that a judge liked English precedents he would craft a brief overflowing with English cases from the 1700s. If he needed help from federal officials he would release a well-placed memo condemning communism. If he needed information from a rival he would take them out drinking. “He’d get a lot of outside lawyers together in a room, and he’d be talking and laughing and drinking along with the rest of them and getting everybody relaxed and open, and he’d seem to be having such a good time with them that you wouldn’t think he was listening.” Franklin Williams a former NAACP lawyer turned diplomat later recalled, “But after they’d left, there it all was—he’d had the benefit of all their brains, which was his strategy in the first place.” 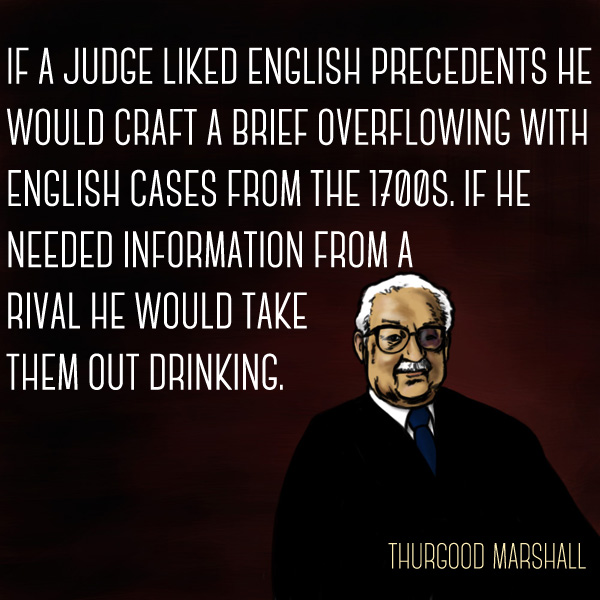 He also had a long term view of the battle, something stressed by Team Obama in a recent profile in the New Yorker. “[Obama] has learned through those vicissitudes that every day is Election Day in Washington and everyone is writing history in ten-minute intervals,” David Axelrod told journalist David Remnick. “But the truth is that history is written over a long period of time—and he will be judged in the long term.”

Marshall’s great strength was his ability to see the long term. As Chief Consul he was responsible for developing the legal strategy to overturn segregation. His core plan was to select only the best plaintiffs, “as the aim was to try their cases in favorable courts in order to establish precedents, usually through the appeals process.” This meant he rejected a lot of cases, much to the chagrin of the Civil Rights Congress (CRC), a rival organization that was targeted by the House Committee on Un-American Activities. [2. By contrast the NAACP had the support of the FBI and numerous administrations, largely due to Marshall’s ability to differentiate the two civil rights organizations] Unlike the NAACP, the CRC did not devote the bulk of their budget to legal defense, plastered billboards all over America, and were so radical that they hosted a concert by a singer who the French rioted off the stage for being Anti-American. Marshall believed their strategy “was to go into the local community, spit on the door of the courthouse, cuss at the judge and raise holy cain—and, incidentally, get the men electrocuted.”

For many liberals Obama’s Presidency has been nothing short of a disappointment. Guantanamo, lack of Wall Street reform and the persecution of Whistleblowers are just three of many. The rapid change we were promised with candidate Obama became a cautious President. But maybe liberals aren’t seeing the long game, there’s more to changing society than short-term media success and rasing holy cain. The JOBS Act included a provision to democratize venture capital, Obamacare could lead to single-payer health care, and we may be near the end of a 40 year destructive drug war.

Twenty years down the line one of these would be considered a major accomplishment.

All three would be downright Marshallian.

1 Comment → Obama, Thurgood Marshall and the Importance of a Long Term Vision