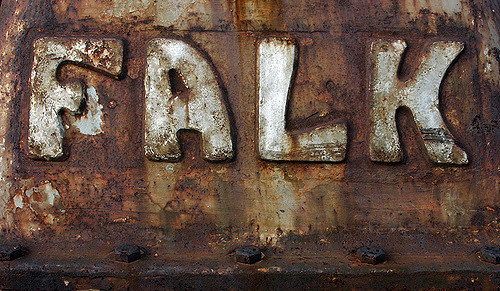 Like many great companies, today the Falk Corporation is forgotten. At its height, it perfected the silicon chips of the industrial era. Falk designed and manufactured fat gears and thin gears, cheap gears and expensive gears, gears that could open the Panama Canal, and gears that fit on a small desk. It made gears for engines, dams, trains, conveyor belts, subway systems—any industry that needed to transfer power probably used Falk Gears.

There’s a good argument to be made that after a century of dominating the industrial era, it fell victim to the innovator’s dilemma. Falk’s corpse was sold for $295 million in 2005. Today it doesn’t even have a proper Wikipedia page.

I began researching the Falk Corporation because I wanted to learn more about the innovation network of Silicon Valley. It may seem odd to research a defunct Milwaukee-based gear manufacturer for this, but it makes sense when you ponder the history. By every conceivable measure Silicon Valley is the epic center of modern innovation. The bulk of the software and algorithms that power the world are designed inside the 20 mile region. Its evolution is also fairly straightforward: government subsidies, elite education system, solid business support and infrastructure, etc. In the early 1900s, as crazy as it sounds, that innovation epic center may have been Milwaukee. The industry was industrial metal fabrication, and in a span of about twenty years 10-15 companies that would dominate the mid 1900s sprouted within few miles. Six came from a 3-4 block radius in what is now known as Walker’s Point: Pawling & Harnischfeger (cranes), Kearney & Trecker (milling), A.O. Smith (car frames), Allis-Chalmers (everything), Nordberg and Chain Belt (mining equipment).

That’s what set me down the Falk Corporation’s path. I was trying to discover why it came to be, and what it means for today’s world–specifically building an innovation based economy. Here’s a super annotated version of my notes on the early history of the Falk Corporation. They’re primarily derived from the Milwaukee Public Library’s vast resources and the work of Milwaukee historian John Gurda.

Herman Falk, was born into a life of immense privilege and opportunity. His father, a cooper’s son, started Falk Brewery. At its peak, it out produced 20th century giants Schlitz and Miller—combined. The brewery had production capacity of around 200,000 barrels. To put that in perspective, today the largest brewery in Chicago maxes out at 250,000. In 1892 the largest brewing company in the world was created when the family sold itself to Pabst for over $500,000 in stock.

That’s the gist of the Falk Corporation’s early history. If you have any additional thoughts or recommendations I’d love to hear them!