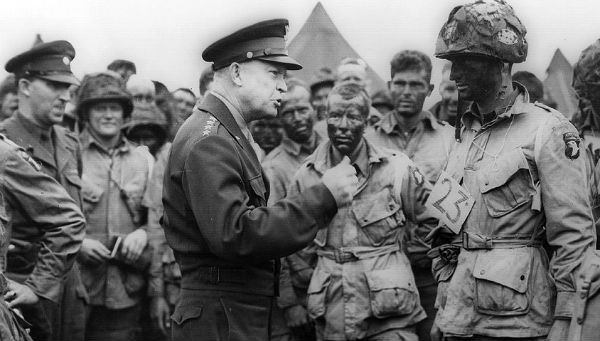 The below is a history hypothetical. Inspired by Chuck Klosterman’s HYPERthetical’s, the following asks a seemingly ridiculous question rooted in historical fact. Remember, the premise is not 100% true, but is meant to stimulate an absurd conversations. In this case, Mamie Eisenhower did not make an emergency stop in Europe during WW2, but Eisenhower and Summersby were certainty involved.

t is May 1944 and you just joined the army. D-Day is weeks away and planning is in full throttle. One small mistake could upend months of secret logistics and strategy. To your surprise you are assigned as General Dwight Eisenhower’s personal driver for the initiative. In an odd bureaucratic maneuver, you don’t report to the General, but rather Kay Summersby, a beautiful Irish girl who is his Senior Assistant and takes fencing classes every day from 6:30-7:30pm. You’ve been told it is a tremendous opportunity. You are responsible for chaperoning the leader of the invasion, and making sure his life runs smoothly. A fresh Eisenhower means a fresh commander, which means the Allies have a shot at winning the war.

In basic training you hear a rumor that that Eisenhower plans to leave his wife and marry the Kay once the war is over. [1. This rumor, started by Truman, has largely been disproven, but nearly everyone agrees that Eisenhower and Summersby were romantically involved.] It has been three weeks on the job and you have not seen anything overly suspicious about the two’s relationship, but Eisenhower has one very specific rule: He is not to be disturbed for any reason from 6:08-7:13pm. You have no idea what he does at this time, but sometimes you hear him playing Bing Crosby records.

One night you receive a message at 6:30pm that Eisenhower’s wife decided to make a surprise visit to Europe, and will be arriving at the residence in 10 minutes. You run to the gymnasium to tell Kay the information, but the fencing instructor informs you he has never met Kay Summersby. In fact, no one on the floor has seen her since 6:00.

It is now 6:40 and you can hear Bing Crosby sing Christmas carols in the background. Eisenhower and Kay are nowhere to be found, and the doorbell just rang.

It is Mamie Eisenhower.

What do you tell her when she asks about Ike?