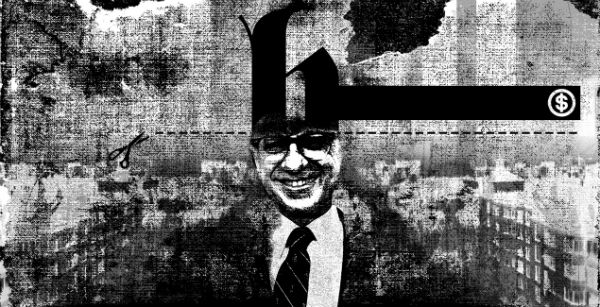 n 2012 the top 1 percent of Americans took home over 20 percent of the income generated in the country. According to Annie Lowrey of the New York Times, this level of income equality was one of the highest rates since 1913, when the federal income tax became law. Think about that for a minute. Things are more unequal today than when John D. Rockefeller was alive. “That should offend all of us,” President Obama remarked in a December speech addressing the topic.

In a lot of ways income inequality is like climate change. Both are happening, both are exacerbated by our current system, and both threaten to upend the entire world.  Deniers of both situations create an environment where facts become debatable. Despite 97 percent of climate scientists agreeing “that climate-warming trends over the past century are very likely due to human activities,” it is still acceptable for a mainstream American politician to argue if it is even happening. The same holds true for income inequality. “In far too many countries the benefits of growth are being enjoyed by far too few people,” Christine Lagarde a managing director at the IMF told a group at the World Economic Forum. If a leader at an organization whose answer to every economic problem is tax cuts and trade liberalization says income inequality is a problem, it is a problem.

But deniers don’t view it as one. New York Times op-ed writer David Brooks argues that talking about income inequality “needlessly polarizes the debate.” He is also the same guy who believes that legalizing same sex marriage limits freedom, male unemployment is driven by male pride, and roots for the Duke Blue Devils. In short, he probably orders wine at a dive bar, lacks critical thinking skills and couldn’t get hired as an intern at Buzzfeed if he submitted a random writing sample under the alias Artemus Jackson.

Brooks bases his argument on economic ideology rather than empirical fact.  “The primary problem for the poor,” he writes in an Op-ed, “is not that they are getting paid too little for the hours they work. It is that they are not working full time or at all. Raising the minimum wage is popular politics; it is not effective policy.” Brooks is arguing that government restrictions, such as minimum wage laws, are the cause, not the solution of income inequality. Unfortunately this is common ideology among conservatives.

This idea of market inefficiencies was first popularized by Milton and Rose Friedman in their book Free to Choose. The book, a 338-page libertarian manifesto, can be summed up in one sentence: Unbridled capitalism is the solution to every problem in the world. Their argument around income inequality isn’t necessarily that it is wrong, but that it can be fixed through removing market imperfections: eg. regulations, labor unions, and taxes. The Friedmans argue that as long as workers are efficient incomes will rise. “The whole pie is bigger,” they write, “There’s more for the worker, but there’s also more for the employer, the investor, the consumer, and even the tax collector…That’s the way the free market system distributes the fruits of economic progress among all people.” This ideology has informed every aspect of modern conservative economic ideology.

he below graph (from data provided by the Bureau of Labor and Statistics and the Federal Reserve) shows that the average worker’s productivity consistently increased over the last 40 years.

So it is clear that productivity increased in the last 40 years.  Baring some extreme market imperfection wages should have increased as well. Well, that’s not the case. 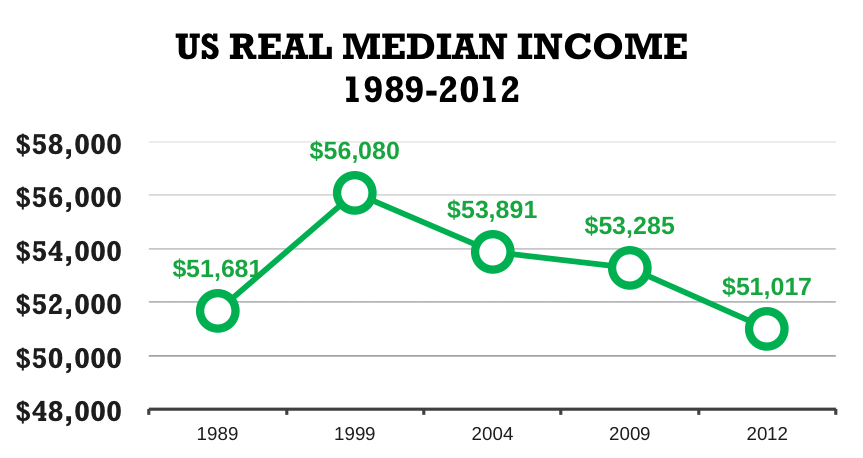 The median family wage in America is  lower today than it was in 1989, before the IT revolution spearheaded massive productivity gains. Now, the Friedmans and Brooks would argue that the cause of this decline can be found in government interference. If labor unions and wage laws didn’t exist people would be free to negotiate their share of the productivity gains. If there was not a progressive tax system there would not be adverse incentives to earn more money. But again, this is economic dogma rather than empirical fact.

According to data complied by Janet Gornick, a political scientist at the CUNY Graduate Center, the US actually has the least amount of income redistribution of any developed nation, and yet experiences the most income inequality. 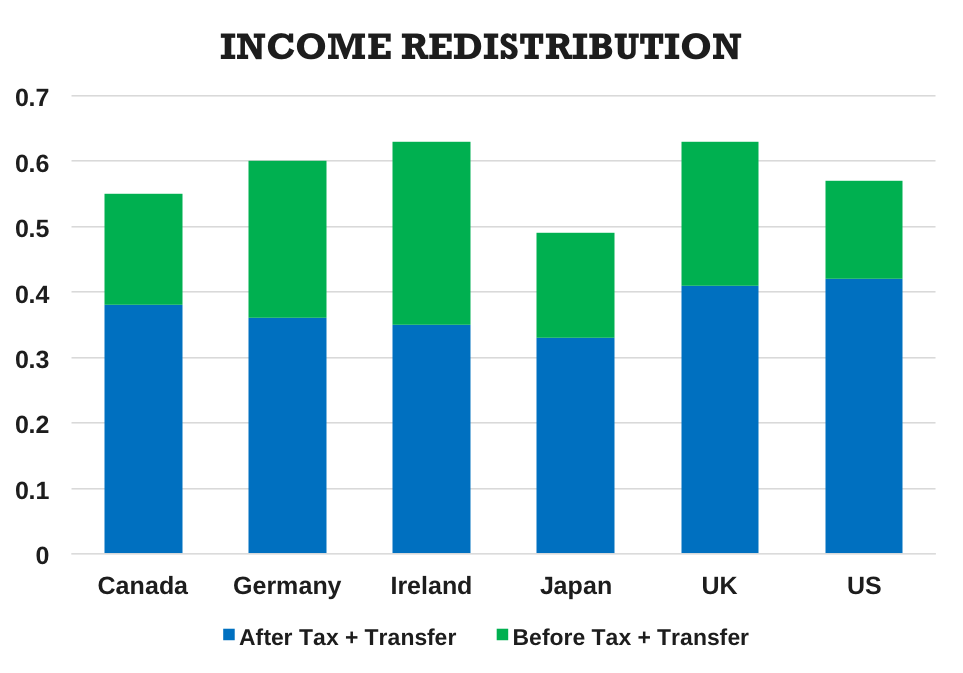 “One striking thing about this chart is that the U.S. figure for pre-tax inequality (0.57) doesn’t really stand out.” John Cassidy of The New Yorker wrote. “Where the United States does stand out is in the level of inequality after taxes and transfers. Judged by this metric, the United States is the most unequal of all the twenty-two countries.”

A new theory on income inequality

“This has nothing to do with a market imperfection,” Thomas Piketty, a French economist, writes in his soon to be released Capital in the Twenty-First Century.  Along with his research partner Emmanuel Saez, Piketty has spent his entire career studying income inequality. For their work the pair have received the John Bates Clark Medal, a MacArthur Genius Grant, and Le Monde’s best young economist award. In a review, the World Bank called Capital in the Twenty-First Century one of the “watershed books in economic thinking.” In the book Piketty argues that income inequality isn’t a sign of a market distortion, but rather a perfectly functioning market.

But if the rate of return on capital (r) remains permanently above the rate of growth of the economy (g)—this is Piketty’s key inequality relationship r>g—then α increases by definition, and combined with the increasing β, might drive the share of capital in national income sky-high. The process has a positive feedback loop: as α increases, not only do capital owners become richer, but, unless they consume the entire return from their capital, more will remain for them to reinvest. The increased saving in turn makes the growth rate of capital exceed further the growth rate of national income and raises β. Thus not only does higher β lead to higher α but higher α leads to higher β.

In English: If the rate of return on capital is higher than the growth rate of the economy wealth will concentrate to the top. This is exactly what is happening. Technology has lowered capital costs across nearly all industries. Income inequality will only get worse. Piketty’s solution? A confiscatory tax rate.

It will be interesting to see how David Brooks reacts to that.