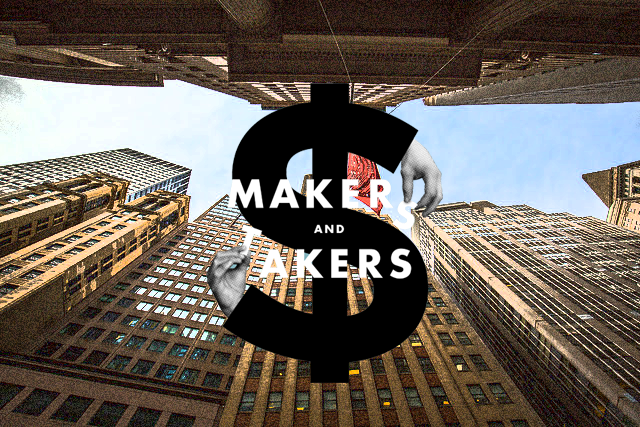 In 1946, over a decade before he became the architect of the Vietnam War, Robert McNamara was hired to rehaul the Ford Motor Company. It was in desperate need of help. The iconic corporation was hemorrhaging about $9 million a month. McNamara, an accountant by training who rose to prominence by applying statistical methods to warfare planning, immediately transformed the culture.

Decisions were no longer made from the eye of a designer, or the experience of the line-worker. He immediately developed complex financial metrics to measure a product’s viability. Every penny spent in manufacturing, marketing, design, and engineering had to be justified and rationalized through this analysis. It shifted power from engineers to MBAs. Within three years he doubled the company’s profits. In Makers and Takers, Rana Foroohar argues that this was the end of American global automobile leadership. As crazy as it sounds, the question needs to be asked: Did modern finance destroy innovation?

The book’s central argument is that finance should be a utility. Unlike an electric company, which allocates energy to businesses and people to power the economy, banks allocate capital. Theoretically, in an efficient financial system all an entrepreneur needs to do is have a great idea and a solid business plan. The bank evaluates the plan, loans the money, and makes a profit on the interest. It’s an easy, boring business. If things work out the entrepreneur becomes wealthy, people are employed, and the community receives long term investment. Foroohar presents the case that McNamara spearheaded a revolution that moved finance from a supporter of the economy to the center piece. It no longer allocates capital and gets out of the way; today finance manages nearly all aspects of business. It no longer helps make society; it takes from society.

You may be asking yourself, “Didn’t McNamara’s approach double profits in a few years? Didn’t he he bring a company back from the dead?” I think Foroohar’s answer would be: not really. Of course, every firm needs some level of financial structure to succeed, and he should be applauded for his contribution. But during the post-WW2 era, Ford’s growth was driven primarily by societal trends not anything one person did. The U.S. government invested $25 billion to create a 41,000 mile interstate highway system that reduced the time it took to cross the country from about two months to five days. Incomes rose by 2.5 percent a year creating the middle class. In plain English, McNamara’s arrival coincided with both a massive increase in the demand for cars and a budding infrastructure to drive them on. He was born on third base, and everyone thought he hit a triple.

From a product perspective, Ford was in such good shape that it took about a decade for McNamara’s impact to be felt. According David Halberstam’s The Reckoning, a 1986 opus on the decline of the American automobile industry, under his system, managers “contrived not to improve but in the most subtle way to weaken each car model, year by year.” This meant “a cheaper metal here, a quicker drying paint there.” Foroohar reports that the system tried to eliminate spare tires in the vehicles, because managers didn’t know anyone who ever had to change a tire (Executives often had company cars—replaced every six months). Eventually the small cutbacks led to huge profits at the expense of quality. During his tenure, Ford debuted two of the most universally loathed cars in the history of the industry: The Pinto and the Edsel. “Accountants were replacing tradesmen,” Foroohar writes. “Making money was slowly but surely replacing the goal of making great products.”

The most damaging legacy of McNamara may have been his impact on labor relations. Labor became a commodified input. It was now something to be managed and squeezed; just a cost of doing business. Never mind that one of the major drivers of innovation is the collaboration of the factory floor and the engineering team. There’s a reason why Bell Labs designed their buildings to house both engineering and manufacturing—a strategy Tesla uses today. While Japanese and German firms were becoming more productive and agile by engraining labor into the strategic decisions of the company—America was building walls and eroding key competencies by outsourcing production.

Foroohar’s book isn’t perfect–it goes on a bit long and only offers a few solutions—but it’s a well-meaning and well researched book on the modern economy. Not the economy that we hear about on the nightly news or in sound bytes, but the actual structure and incentives driving modern business. She makes a good case that yes, modern the modern financial system has destroyed America’s ability to innovate. The entire system rewards short term gain, over long term investment. The good thing, she notes is that none of this is permanent. “We can remake [the economy] as we see fit to better serve our shared prosperity and economic growth.”